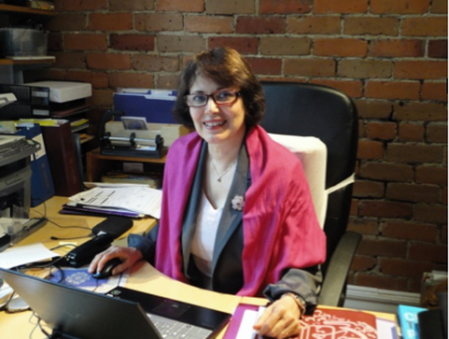 At the 2017 meeting of the CASCA Women’s Network, Dr. Homa Hoodfar was awarded the Lifetime Achievement Award for Contributions to Feminist Anthropology in Canada. We are pleased to publish Sally Cole’s description of Dr. Hoodfar’s incredible career and to welcome her back to Canada after her months-long imprisonment in Iran.

Born in Iran in 1951, Homa did her B.A. in Economics at the University of Tehran and moved to Britain in the 1970s to do an interdisciplinary M.A. in Development Studies at the University of Manchester and her PhD in Social Anthropology at the University of Kent.  She came to Montreal in the late 1980s teaching first at McGill University and then settling in at Concordia University in 1991 where she was a much loved teacher for more than 20 years.  She retired from Concordia in June 2015.  At Concordia, Homa designed and taught the popular courses: Contemporary Issues in Human Rights; Development Debates; and Popular Culture in the Middle East.  Mentoring students, both men and women, was very important to Homa.  She was always available to students and often lost track of time in enjoyable after-class conversations with them.  As a result, she would work late to make up for time spent during the day with students.  She was well known to Concordia security guards who, making their late night rounds, would find her still at her desk in the quiet of her office.  Students have described her as “a second mother.”  A wonderful cook she often brought food to graduate seminars that, at Concordia are often held at night — a legacy of Concordia’s origins in Sir George Williams’ night school for working people.   Food was important.  Homa often recalled how much it had meant to her as an international student in Britain far away from home to share meals together and especially to celebrate Christmas!

Homa Hoodfar is the author of 55 articles and 7 books including the award-winning Between Marriage and the Market: Intimate Politics and Survival in Cairo (University of California Press, 1997), Development, Change and Gender in Cairo: A View from the Household (Indiana University Press, 1996) and Sexuality in Muslim Contexts: Restrictions and Resistance (Zed Books 2012).  She is an indefatigable field researcher and received awards from The Mellon Foundation, The Population Council, the World Health Organization and SSHRC for her pioneering research in Iran, Egypt and Pakistan on topics such as:  gendered citizenship and the codification of Muslim family law under the Islamic Republic of Iran; the effects of prolonged conflict and forced migration on Afghani refugee families in Iran; women taxi drivers in Iran; and Muslim women and sport.   In 2014 she was the Guest Editor of a special issue of Journal of the Middle East: “Sexuality, Culture and Public Politics in the Middle East.”

In 1984, Homa co- founded the international solidarity network, Women Living Under Muslim Laws (WLUML) that works to build and disseminate knowledge and to facilitate exchange between women living in different geographical areas and Muslim contexts.  Today, WLUML maintains an amazing interactive website (in seven languages!) that receives over a 1 and 1/2million visitors each month.  WLUML also translates landmark academic publications from English into Farsi and Arabic and has curated major travelling exhibitions, most recently the exhibition “Dress Code and Mode.”   Homa is chair of the WLUML publications committee and editor of the network’s journal, Dossiers.  For WLUML, in 2000, she co-authored Electoral Politics:  Making Quotas Work for Women and Building Civil Societies: A Guide to Social and Political Activism (translated into Farsi and Pashto), a manual of practical instruction on how to prioritize issues and set goals for political action, how to organize a letter-writing campaign and how to work with the media. WLUML is a true labour of love that continues to guide Homa’s life in retirement.

In February 2016 at the end of a personal visit to visit family in Tehran, the Iranian Revolutionary Guard prevented Homa from returning home to Canada, confiscated her passports, computer and phone and placed her under house arrest and constant surveillance.  She was frequently taken in for questioning for lengthy periods, often about her work as a feminist anthropologist.  In June she was placed in Evin prison where her state of health declined and she was unable to have contact with family.  Throughout the summer – with very little knowledge of her condition and no stated charge to explain why she had been imprisoned (one statement from the Iranian regime apparently suggested that “dabbling in feminism” was her crime) — colleagues, friends and family campaigned for her release.  Petitions were signed by thousands of scholars worldwide.  Academic colleagues published articles in global media including The Guardian and The New York Times on the importance of her career as a feminist scholar in bringing a nuanced and contextualized understanding of the diversity of gender relations in different Muslim contexts especially Egypt, Pakistan, Afghanistan and Iran all places where she had undertaken ethnographic fieldwork.  Homa was not released until late September 2016 after 110 days in prison at which time the world was able to hear from her first-hand about her experience.

Once safe at home in Montreal, despite her tremendous fatigue and neurological and serious vision problems, over the fall of 2016 Homa graciously responded to media requests for interviews.  As is so typical of Homa, she offered her experience as teaching moments.  In interviews, she described how – ever the social scientist! — she took her prison cell as a research site.  To the CBC’s national evening radio program, As It Happens, she described how she had used a toothbrush to jot field notes of her observations of prison life, her captors and her fellow inmates.  When Homa referred to her prison fieldnote-taking on CBC’s national morning show, The Current, host Anna-Maria Tremonte asked her “what is ethnography?” Homa took this opportunity to explain the principles of ethnographic observing and the value and importance of recording women’s everyday lives, routines and decision-making as members of extended families, neighbourhoods and workplaces.  She told us, the Canadian public, how the RG tried to penalize and stigmatize her by placing her in the section of the prison where sex workers were held rather than among fellow intellectuals, other academics and journalists.  Little did her captors know that here Homa was a fish in water.  She gained strength and maintained her spirits through her solidarity with other women prisoners and talking together about their lives.

Now at home, she continues to be gracious and full of laughter, not bitter or accusatory about her experience.  She understands that as a feminist ethnographer she posed a great challenge to the RG:  for, in the end, what were they to do with her fine-grained micro-observations and technical descriptions of everyday lives of ordinary people living, loving and laughing as they face the challenges of building futures for themselves, their families and their friends and neighbours in contemporary Iran?