After arriving in Santiago de Cuba and exploring media consumption in Cuba with little or no access to the internet, we were inspired by our conversation with Fidel Alejandro Rodriguez, a Cuban scholar and Professor at the Universidad de La Habana who researches the circulation of digital information in Cuba. We decided to investigate how Cuban citizens obtain digital media resources and how they are able to share them without the availability of full internet access on the island.

We looked into the sharing of data through hard drives, memory sticks, routers, Nanos, cables, and public Wi-Fi hotspots. We were soon introduced to the popular local phenomenon of El Paquete Semanal, a weekly package containing digital media which can be copied either in its entirety or by choosing specific entries, folders, or series. We bought the whole Paquete for the week of the CASCA-Cuba conference, copied its contents and explored them. Digging into digital archives inspired us, as anthropology students on an ethnographic field school in Cuba, to do a digital archeology of media.

While going through El Paquete Semanal, we found that it includes a large variety of digital media contents including movies, music, TV shows, sports, documentaries, news, items for sale, movie trailers, YouTube videos, games, and advertisements. Usually, Cuban citizens access the Paquete by going into a Paquete store (often located in a residential house) and buying either the entire package or particular items and files that they are interested in. Then they copy them to their own memory stick or hard drive. The Paquete can also be delivered by bicycle or motorcycle.

Instead of browsing the internet, Google searching, watching YouTube videos, scrolling through Netflix and Facebook, and looking at Craigslist items for sale, Cubans can access the centralized database of the Paquete which is an offline conglomeration of various websites. There is a large variety of what you can search for and copy from the Paquete, but compared to the extremely broad spectrum of access we are exposed to on the Internet in North America and Europe, the amount of media is still very limited.

We were surprised by the architecture of the Paquete because it was so well structured and categorized into folders and subfolders. This organization made it easy to navigate and less overwhelming than we thought it would be. We also felt that it did not have the overload of data that the Internet has. For example, the music folder is further split into a national and an international music folder, and films and series are often organized by genre (such as animation, drama and comedy) or by variables such as availability of subtitles in Spanish or English. 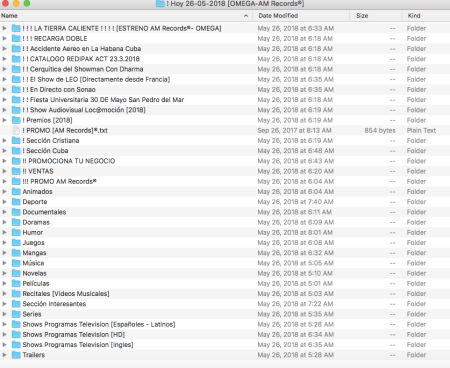 As this Paquete contained a massive amount of information on current events and popular media, we discussed how this would be useful to have even in countries with full speed access to the Internet. This way of sharing media connects Cubans to each other and the rest of the world similarly to the Internet but without actually needing to access the Internet. For example, the ‘for sale’ section replaces Craigslist or Amazon, and the offline availability of new YouTube videos acts as a substitution for the online version of YouTube.

We thought of the process of seeking out a Paquete store as a kind of digitized library you can visit to obtain certain media contents from ‘the digital librarian’ or the person selling the Paquete. When you go into a library, you ask the librarian if they have a specific book. In this case, you ask for a specific series or folder that you want to copy. You can also ask the Paquete seller advice as to what they think you should buy based on your personal preferences.

Sharing the Paquete through informal social networks of friends and family creates social bonds, Fidel Alejandro Rodriguez emphasized during our conversation: “Sharing media forms part of the way people relate to each other. If you are my friend and you have a movie on your memory stick, you have to share it with me because you are my friend”. It connects individuals, households, neighborhoods and all of Cuba by sharing information without direct internet access.

We learnt that the Paquete is ephemeral: as hard drives are scarce and often rapidly filled up with offline files, it is impossible for the sellers of the Paquete to keep archival track of each week’s update. The same goes for the consumers of the Paquete, who often own USB sticks of as little as 4GB and whom we witnessed needing to erase files on the spot in order to copy the newest episode of their favorite series. The Paquete does not last, but does allow to watch movies ‘on demand’, which analogue television does not allow.

In terms of time, the temporality of the Paquete blew our minds because of the speed by which its contents cross geographical borders locally, nationally and internationally. Rumors have it that the contents of the Paquete travel to Havana by plane from Miami, and from there the hard drive travels by bus throughout the country, all in one day. When we were looking at the Paquete on our computers, we clicked and copied some movies, songs and episodes so that we could then watch them later on. There are some movies on the Paquete that have just come out in North America, such as a ‘Wrinkle in Time’ that we have not watched yet.

This brings us to the question of legality, which has been a central focus of Fidel Alejandro Rodriguez’s research. “We have a cultural understanding that access to culture is free and for all. So, piracy is considered differently here in Cuba: sharing digital media and copying information are not forbidden if it is not for commercial use. Within the Revolutionary context, people are not expected to pay for the right to share goods”.

The Paquete situates itself in a tolerated grey zone of the law as it is technically not commercial. It was invented to distribute digital media offline in the absence of internet, but its function has changed over time from an act of sharing to a monetized commercial practice. Fidel Alejandro Rodriguez explained that the laws are not adapted to these practices of piracy yet.

Our Paquete excavation was a great discovery: we found that the phenomenon is more popular in Cuba than we expected it to be and the amount of information that this weekly package contains is impressive. Even with full access to internet, the Paquete is a super convenient solution with organized folders that take away the stress you experience when browsing the internet to look for recently updated music and series yourself. This is interesting because the Paquete does all the work for you: it is organized, updated and filtered.